What are the components of the PSA nitrogen making machine system 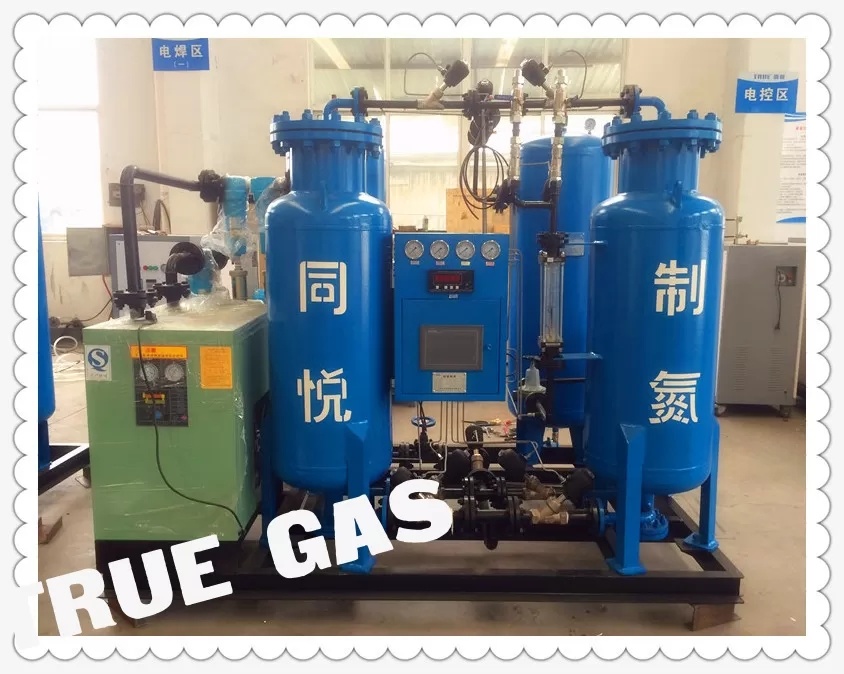 1. Air source system: It is composed of an air compressor and an air storage tank to provide compressed air as raw materials for nitrogen production.
2. Air purification system: It consists of a refrigeration dryer, a filter, a degreasing filter, etc. It is mainly used to purify the air, remove dust, particles, oil, moisture, organic matter and other impurities in the environment, and ensure that it enters the PSA nitrogen making machine. The separated compressed air is clean and dry.
3. Air buffer tank: It is composed of air storage tanks, valves, etc., and is mainly used to ensure the stability of the air source.
4. The main unit of the nitrogen making machine: PSA nitrogen making machine is mainly composed of two adsorption towers filled with carbon molecular sieve and an automatic control valve, which is the core part of the whole system.
5. Nitrogen buffer tank: It is composed of nitrogen storage tank and valve, which buffers nitrogen, mainly to ensure the stable use of gas.
6. Electrical control system: It is composed of PLC, circuit system, instruments, valves, etc.
7. Nitrogen storage tank: store the finished nitrogen.
8. Purity automatic alarm device, unqualified nitrogen automatic emptying device, remote control system, etc. can be customized on demand.

Laser Cutting Machine N2 3LPM PSA Nitrogen Generator The manufacturer tells you that the nitrogen generator is a kind of equipment that does not sound like what it does, but it is widely used in production enterprises.

99.999% Purity Stainless Steel Onsite Nitrogen Generator For Food Fresh Packing The manufacturer will show you how the nitrogen generator works

99.999% Purity Stainless Steel Onsite Nitrogen Generator For Food Fresh Packing The manufacturer tells you that when the mixed gas is under the effect of the pressure difference on both sides of the membrane.

99.999% Purity Stainless Steel Onsite Nitrogen Generator For Food Fresh Packing manufacturers take you to understand the precautions for the safe use of nitrogen generators